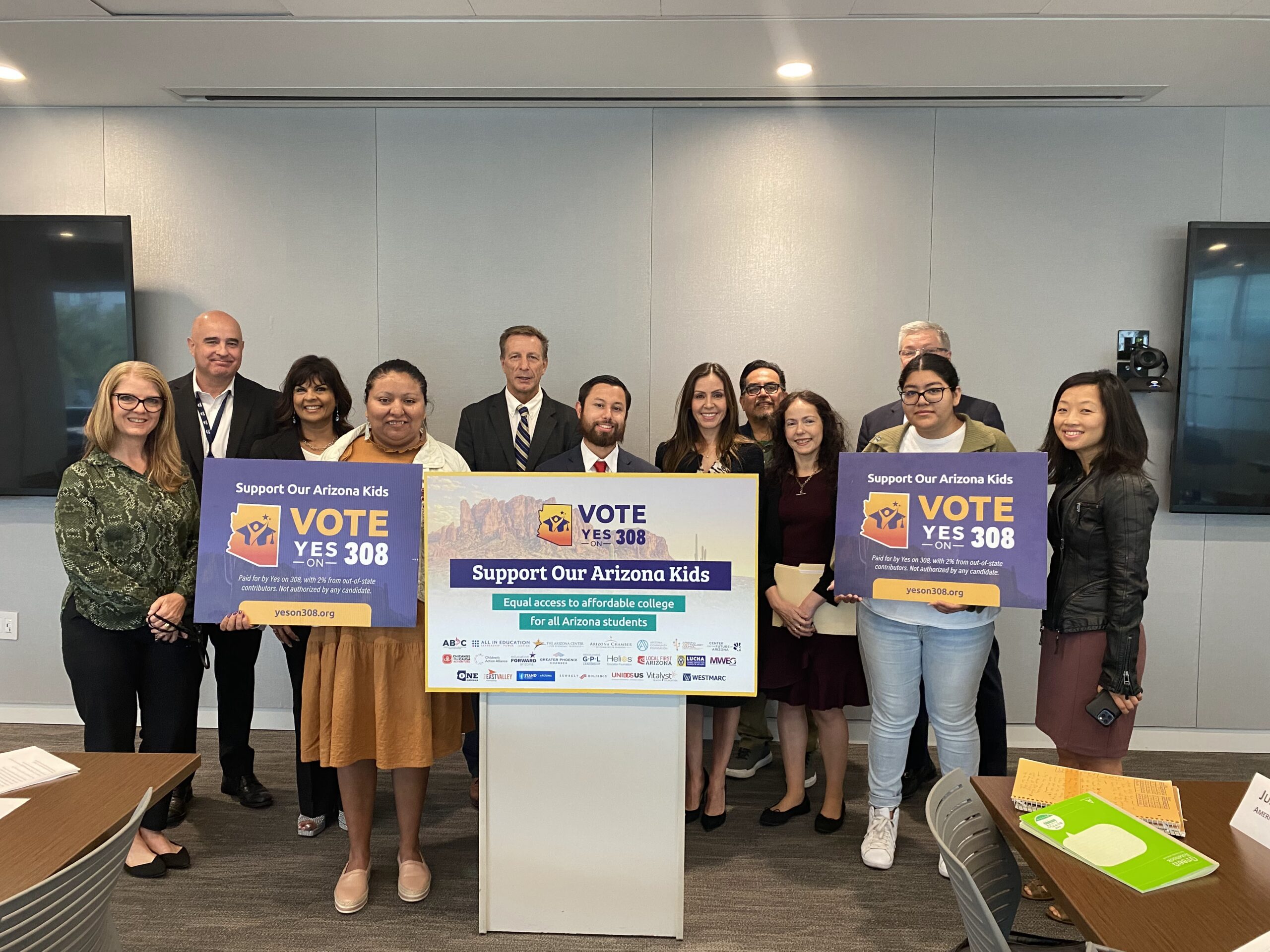 By Jacob PritchettNovember 1, 2022No Comments

“Prop 308 is revenue neutral. This is not a tax increase.” – Greater Phoenix Chamber of Commerce CEO Todd Sanders

PHOENIX, AZ – Today, Arizona business leaders, Dreamers, and community leaders joined with the Greater Phoenix Chamber to call on voters to flip their ballot and vote yes on Proposition 308, a ballot initiative which will allow Arizona high school graduates, regardless of immigration status, to pay the same in-state tuition rate as their peers to attend Arizona colleges and universities.

Proposition 308 would benefit the Arizona economy and help businesses with labor shortages, with no increase in taxes. Today is the last day to mail a ballot for the midterm elections.

“We at the Phoenix Chamber are in support of Prop 308 for a number of reasons, primarily because there are literally more open jobs than people in Arizona,” said Greater Phoenix Chamber of Commerce CEO Todd Sanders. “One of our biggest assets are these Dreamers who are here in Arizona, who are part of our community. They’re in our high schools; they’re hopefully in our colleges, and they are going to be a critical component of our continued economic success.”

Sanders also mentioned that Prop 308 will cost nothing more to taxpayers. “Prop 308 is revenue neutral. This is not a tax increase.”

“I’m currently a freshman. It has been difficult to earn enough scholarships to pay for out of state tuition. From a young age, my parents have instilled how important education is and it’s a value I’ll continue to carry because it will help me accomplish my dreams,” said Arizona Dreamer and college student Diana Mendoza. “Proposition 308 will help open those doors to accomplish those dreams.”

“Every time we’re asking for growth in this Arizona community, we’re trying to recruit companies to bring jobs here, and one of the first questions that’s asked is about prepared workforce,” said Chicanos Por La Causa President & CEO David Adame. “We believe in our community; we believe in these students; we believe in the future of Arizona which includes these Dreamer students. We cannot increase the GDP of this state, which is very critical, without the participation of all our folks who live in this great state that we live in.”

“We want to make sure that all voters support Prop 308. It’s economically important. It’s politically smart,” said ABIC Action Executive Director Rebecca Shi. “If this measure passes, Arizona will gain $27 million a year in economic activity from our Dreamers.”

“When you think about Arizona, and what open jobs, $27 of economic wealth being introduced into the system, you’re creating opportunities, you’re creating competitive advantage for the state, for the business community to educate, train and lift up people that will then trickle down into their communities, to their families, to provide these opportunities,” said State Business Executives CEO Jeff Wasden. “Our trade policies, our education workforce policies, our immigration policies – we need to work on them all, but we need to start somewhere, and that starts with a vote next week for Prop 308.”

“All of our Arizona students deserve the opportunity to go to our universities and colleges here in Arizona for in-state tuition. Our Arizona students have worked hard to get through our K-12 system, and now they are looking to start that next journey of their academic path and that includes going to our university systems,” said Greater Phoenix Leadership Executive Vice President Heather Carter. When our Arizona students are able to get a college degree, they are able to increase not only their own individual earning power, but also their economic investment into the state of Arizona.”

“Arizona needs more workers. We need more workers in healthcare, k-12 and skilled trades, and Dreamers have wonderful work ethic. They contribute so much already. So why would we put obstacles in their way? We just shouldn’t,” said HeartMark President Tali Lehavi Hamer. “Prop 308 will grow Arizona’s economy by keeping the skilled workforce we need without increasing taxes.

“Healthcare is one of our leading industries, not only in the state, but also in the nation and there is a critical workforce shortage that we have going on in healthcare right now. So providing equal access to all Arizonans to attain their education and credentials to work in this industry is vital.,” said WESTMARC CEO Sintra Hoffman. “Prop 308 is about fairness and it’s about growing Arizona’s economy.”

ABOUT
Yes On 308 is a bipartisan campaign led by education, business, faith, and civic leaders seeking to provide all Arizona high school graduates, regardless of their immigration status, the opportunity to pay their own way through college at the in-state tuition rate. Ending the unfair treatment of Arizona’s undocumented high school graduates by allowing equal access to in-state tuition rates at the state colleges and universities will allow them to reach their educational goals, become self-sufficient, and give back to our community.