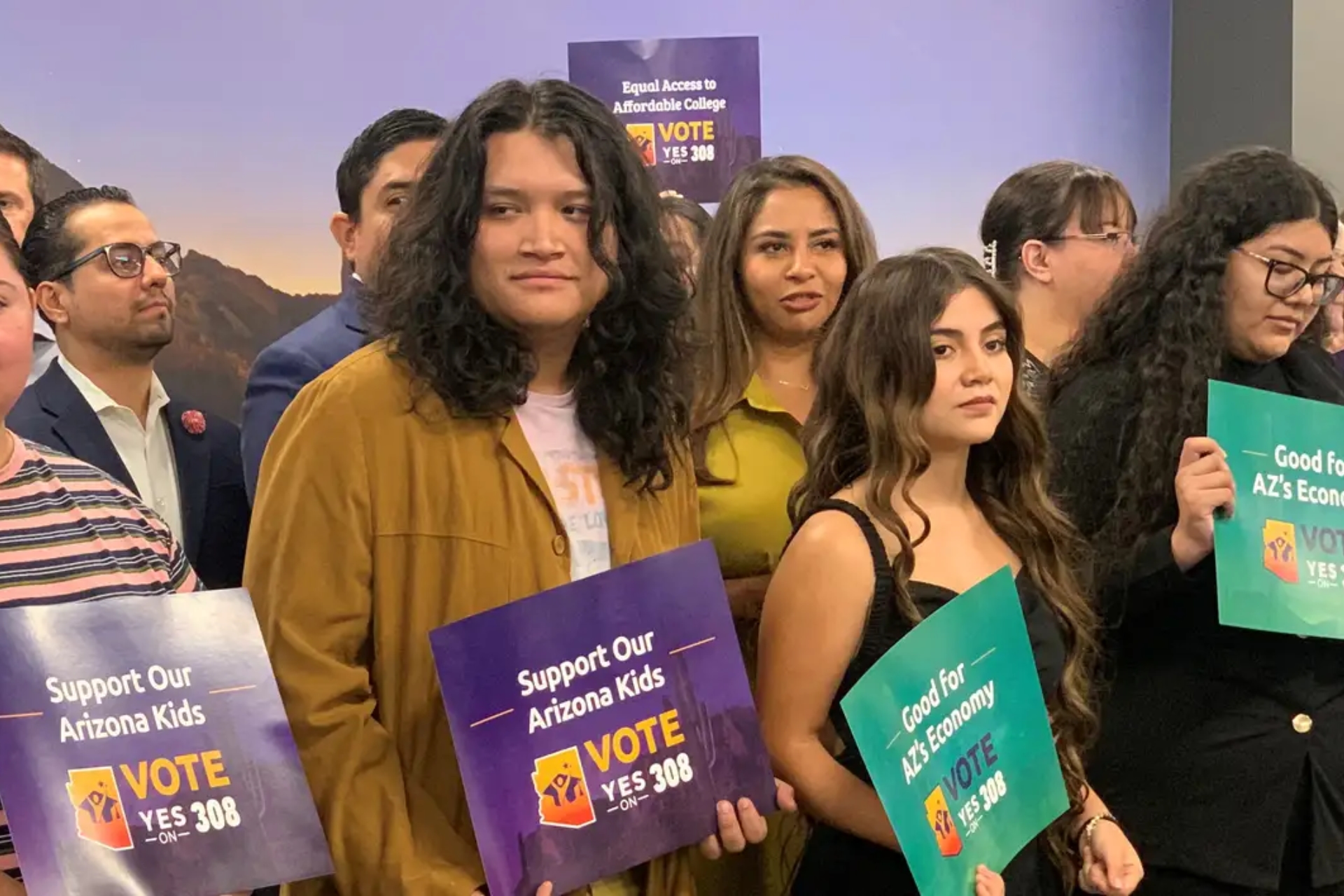 By Jacob PritchettSeptember 18, 2022No Comments

Two out of every three Arizona voters believe that undocumented students brought to the country as children should pay the same amount as their peers for college tuition at the state’s public colleges and universities, according to bipartisan pollsters.

The polls were commissioned by the Yes on 308 campaign, a coalition of 20 community and advocacy organizations spanning the political spectrum pushing for the approval of a referendum to codify that into state law in November.

If passed, Proposition 308 would grant any student, regardless of status, the ability to pay in-state tuition if they graduated from an Arizona high school and have lived in the state for two years prior to that.

The poll results appear to show changing attitudes among Arizona voters towards Dreamers, as undocumented students are also called. The term has been applied to individuals who were brought as children to the United States without authorization.

Alexandra Gomez, the co-executive director for Living United for Change Arizona or LUCHA, said passing Proposition 308 would help undo one of several attacks on undocumented communities in Arizona.

Arizona voters approved Proposition 300 in 2006 by an overwhelming majority. Three quarters voted in favor of restricting access to tuition and state-funded financial assistance to undocumented students.

The measure passed at a time when Republican lawmakers in Arizona had started implementing some of the strictest laws in the U.S. targeting families living in the country without authorization.

Last year, Republicans in both houses of the Arizona Legislature joined Democrats in getting Proposition 308 on the ballot by passing Senate Concurrent Resolution 1044. It didn’t require the governor’s signature, so it will head directly to voters in November.

Two polls conducted this summer show momentum swinging the other way, with nearly 62% of voters saying undocumented students in the state should pay the same amount in tuition as other Arizona college students.

“But it also is perhaps one of the kind of few good bipartisan feel-good stories right now, and a chance to demonstrate to everybody that we can work together and do things in a bipartisan way still,” he added.

To date, there has been no organized opposition against Proposition 308, and the coalition, which includes business, faith and community leaders, is confident of success in the Nov. 8 election.

The Yes on 308 campaign commissioned two firms, one Democratic and another Republican-aligned, to conduct two internal polls to track voter support. They shared the results with The Arizona Republic.

The firms conducted the most recent poll from August 26 to 29, calling 600 likely voters in Arizona. While 62% of voters said undocumented students should pay the same in tuition, nearly 30% said they should pay more. The poll has a margin of error of plus or minus 4%.

As expected, the results also showed a partisan gap in support for tuition access. Nine in ten Democrats said undocumented students should pay the same amount. So did 56 percent of independents.

Among Republicans support was nearly split, with 44% of respondents saying tuition should be the same for everyone and another 48% saying undocumented students should pay more.

Tyler Montague, a Republican strategist who serves as the chair for the Yes on 308 campaign, said having direct conversations with voters will be key to persuading more Republicans, many of whom are angry and fired up over border security concerns.

“There’s an education component that people understand that Prop. 308 — which is really simple. It just says if you’ve been here for two or more years and graduated from high school here, you qualify for in-state tuition,” he said. “There’s no special path. There’s no entitlement. You have to qualify like everybody else. And so that’s all it is.”

On Thursday, the Yes on 308 campaign announced that it would invest $3 million to air ads in support of Proposition 308. The groups making up the coalition announced that they plan on knocking on 2 million doors collectively before Election Day to boost support.

Luis Acosta with the Chicanos Por La Causa Action Fund said the organization would run a $10 million parallel campaign to engage voters and knock on 300,000 doors.

Acosta said he was forced to drop out of Arizona State University as a newly enrolled freshman because of his status. He went to Iowa where he found a college that offered him financial aid to enroll.

“College-bound students who qualify shouldn’t have to leave Arizona to get their education,” he said. “It’s time for Arizona to allow in-state tuition for Dreamers.”

Proposition 300 in 2006 put college out of reach for many more undocumented students.

At first, they had to pay the out-of-state tuition rate, which is double the in-state rate.

Undocumented students now pay a special rate of 150% of in-state tuition at Arizona colleges and universities. But they remain locked out of state aid, so many have opted to enroll in private schools that do offer aid, such as Grand Canyon University.

Emilio Ortiz of Phoenix is a sophomore at ASU. He has lived in Arizona since he turned 10. He said the extra money he has to pay has put financial strains on his growing family.

“I am currently married. My beautiful wife, despite the fact that we’ve gotten a lot of support from her parents and everyone else, we still had to live very economically due to the fact that we have to just give up so much money per semester,” he said.

Supporters of Proposition 308 pointed to findings published by the Arizona Joint Ballot Legislative Committee in July that determined the ballot measure would have no impact on the state’s general fund.

The fiscal analysis by the committee did say that, if approved, the state’s public colleges and universities would be projected to lose an estimated $8.9 million in tuition revenue. But increased enrollment from eligible students likely would offset those losses

Have any news tips or story ideas about immigration in the Southwest? Reach the reporter at [email protected], or follow him on Twitter at @RafaelCarranza.

I live here. Why can’t I pay in-state tuition?