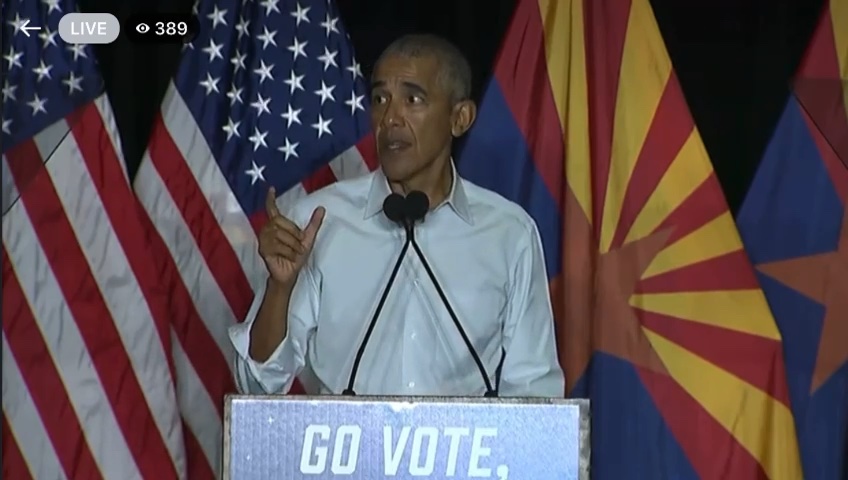 By Jacob PritchettNovember 2, 2022No Comments

“Congress still needs to take care of Dreamers but in the meantime you can vote yes on Prop. 308 here in Arizona to make sure Dreamers have access to higher education as the kids they grew up with. It’s the right thing to do. It’s good for Arizona. It’s good for our economy.”   – President Obama

PHOENIX, AZ – Arizona republicans and democrats issued the following statements in response to President Obama’s call (full remarks on Prop 308 below) for passage for Prop 308 at a campaign rally in Phoenix tonight.

“President Obama’s historical role in the lives of our nation’s Dreamers carries considerable weight when it comes to policies like Prop 308 which stand to make a fairer world for Arizona’s dreamers to freely pursue their ambitions, attain their degrees, give back to their communities, and grow Arizona’s economy. I applaud the President for his support of Prop. 308 and hope it will inspire other leaders from both parties to join him.” – Rebecca Shi, Executive Director, American Business Immigration Coalition Action.

“The endorsement of President Obama underscores how important it is for Arizona to vote ‘YES ON PROP 308.’ Arizona has an opportunity to correct a harmful mistake and allow Arizona Dreamers to pay in-state college tuition just like their fellow high school graduates – with no new taxes and no giveaways. Arizona Dreamers will earn their way, just as how they have done their entire life in the only country they’ve ever known. Vote Yes on Prop 308 is a Yes for Arizona and a Yes for Fairness.” –David Adame, Chairman of Sí Se Vota Chicanos Por La Causa Action Fund and Republican.

“As the creator of DACA, President Obama has always been an important voice for Dreamers in Arizona and the Democratic Party, and we wholeheartedly welcome having  his voice added to the growing bipartisan chorus of prominent politicians speaking out in support of Prop. 308 and the tuition fairness it promises for all Arizona students.” –Alejandra Gomez, Executive Director, LUCHA Arizona and Democrat.

“I commend President Obama for speaking out in support of tuition fairness and workforce investment, values that transcend partisan politics. As a former Arizona republican state legislator who entered politics largely to stop our state’s wave of anti-immigrant attacks, next week marks an historic opportunity for Arizonans to take an important step in righting the wrongs of the past by flipping their ballots and voting yes on Prop. 308.”  –Former Republican Arizona State Senator Bob Worsley.

ABOUT
Yes On 308 is a bipartisan campaign led by education, business, faith, and civic leaders seeking to provide all Arizona high school graduates, regardless of their immigration status, the opportunity to pay their own way through college at the in-state tuition rate. Ending the unfair treatment of Arizona’s undocumented high school graduates by allowing equal access to in-state tuition rates at the state colleges and universities will allow them to reach their educational goals, become self-sufficient, and give back to our community.