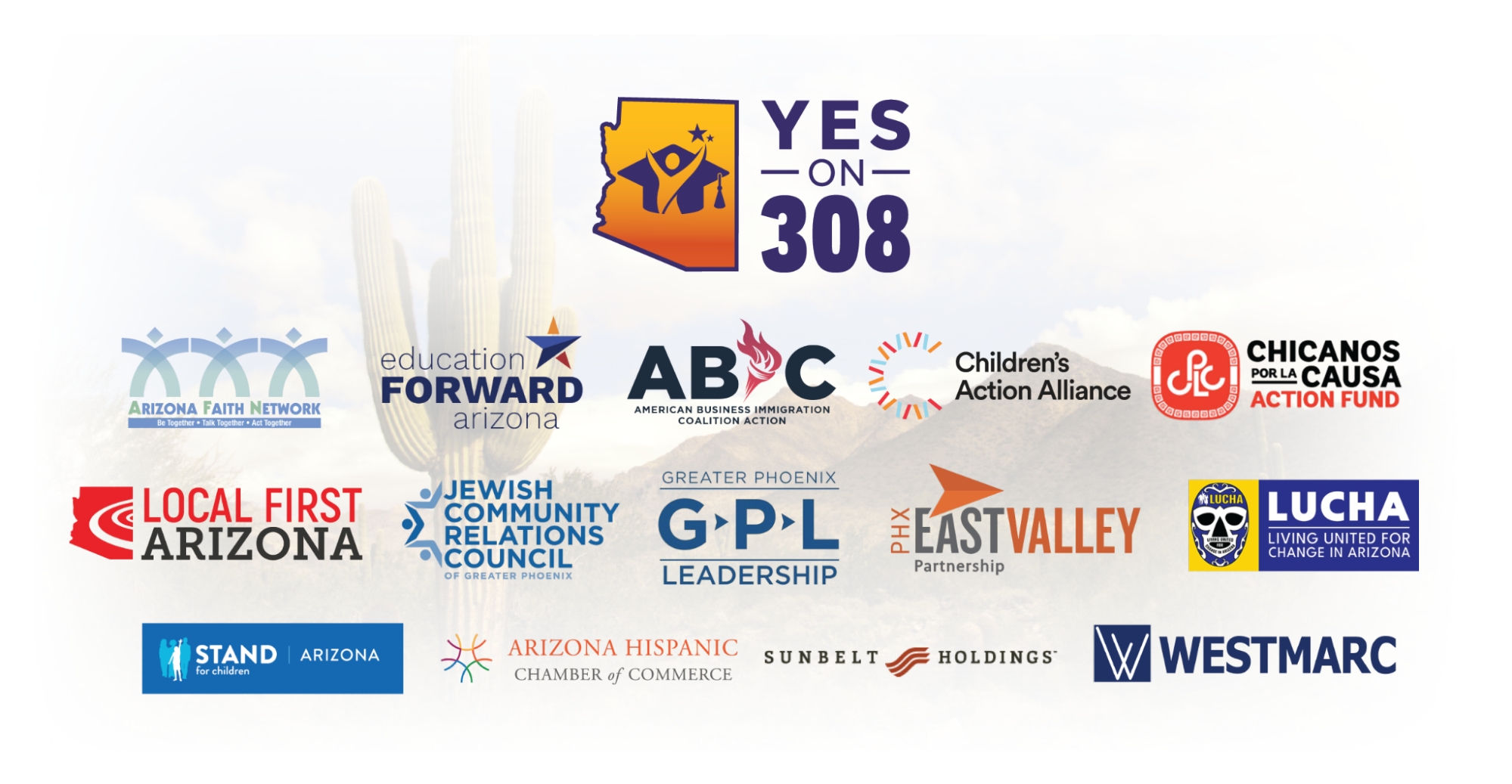 By Jacob PritchettSeptember 23, 2022No Comments

PHOENIX, AZ – Today, the Yes On 308 campaign – a bipartisan coalition comprised of the American Business Immigration Coalition Action (ABIC Action), Chicanos Por La Causa, Greater Phoenix Leadership, Stand for Children, and LUCHA – joined Dreamers, and other business and community leaders to call on Arizona voters to vote Yes On 308, ensuring fairness and equal access to a college education for all Arizona students, including Dreamers.

Yes On 308 also announced the launch of a $3 million ad campaign in support of Prop 308 as well as plans to knock on more than 2 million doors between now and election day.

“When Proposition 308 passes this November, it will ensure any person who has lived in Arizona for two or more years and graduated from an Arizona high school will pay the same tuition rates as their peers to attend Arizona state colleges and universities.,” said ABIC Action Deputy Director and event emcee Rovika Rajkishun. “I came to the US when I was 10 years old and was undocumented for a decade. To go to the school of my choice, I set out on a virtually impossible task of working two, sometimes three jobs, while going to college full-time. So I understand what these students are going through to accomplish their dreams and build productive lives.”

Rajkishun was followed by Arizona Dreamer Hazel Villatoro. “I came to Arizona when I was one year old. I come from a humble and hustling family where education is a priority. My parents worked day and night shifts to provide for us…I graduated a year early from North High School with a 3.8 GPA. I did everything I could to put myself on a path to success: playing varsity soccer, participating in the AGUILA Youth Leadership Institute and co-leading an Arizona Center for Empowerment initiative to increase civic engagement among high school students,” said Villatoro who came to Arizona without documentation when she was one year old. “My dream was to attend Arizona State University this fall. But I can’t afford it.”

“Prop. 308 will help fortify our state’s future economic growth by encouraging all of our talented students to build their careers here, and that begins with fair in-state college tuition rates,” said Sunbelt Holdings Chairman & CEO John Graham. “As our state continues to face labor shortages in key areas like health care and home care, talented workers with degrees are needed now more than ever. We need more talented workers with degrees and we need them more than ever.

“I came to the U.S. when I was four-years-old. I have considered myself Arizonan my whole life just because I was raised here…but as time went on, as I continued my education, I realized the bar wasn’t exactly equal for everyone,” said Arizona State University Junior Diego Diaz-Mendez “And though I was accepted out-of-state, my mother told me, ‘you won’t be able to afford the housing. You should stay here.’ and I did and I enrolled at ASU where I was told I would be paying out-of-state tuition and that the dorms weren’t covered by my scholarship. This led to me finding hardship after hardship financially. I’m trying to continue here. I’m currently having to take a break from school to get my finances in check and continue school.”

“This year is about doing what we do best: persuading, empowering BIPOC, rural white, working poor communities, and this year LUCHA will be knocking on 350,000 doors. We know that Prop 308 is an important conversation at the doors and we are reminding our communities that we have a proactive plan at the state level and that we can win this battle,” said LUCHA Co-Executive Director Alex Gomez. “We also know that what happens in Arizona affects the rest of the country. Come November, the rest of the country will be watching to see what happens with Yes on 308 and it can well set the stage for what happens in other states like Texas and Florida.”

Mayor John Giles, City of Mesa: “I’m the Republican mayor of one of the largest conservative cities in America. I think it’s just a smart policy move to get rid of this artificial obstacle that currently exists for Dreamers who want to go to college. We don’t want to stop Arizona kids who we’ve already educated in k-12 from going to college to become more productive and more self-sufficient. We want more educated people, and voting yes on Prop 308 will help accomplish that goal.”

Greater Phoenix Leadership President & CEO Neil Guiliano: “Keeping talented student Dreamers in Arizona would greatly benefit our state economy. Granting access to in-state tuition to all Arizona graduates is an important step toward meeting critical workforce needs and would greatly benefit the state’s economy. Overwhelming research shows us the crucial role that student Dreamers play in Arizona’s economy, including in some of the state’s fastest-growing and most in-demand fields, like healthcare, education, and the skilled trades. Our community of leaders understand that Prop 308 will benefit our young Dreamer students, our small businesses and large employers, and Arizona as a whole.”

Chicanos Por La Causa (CPLC) Action Fund member Luis Acosta: “I was born in Mexico but came to the US when I was 2 years old. I have lived in Phoenix for almost all of my life. My family showed us at a young age the value of education. For me, getting my education was the opportunity I used to achieve the goals that I set in my life.