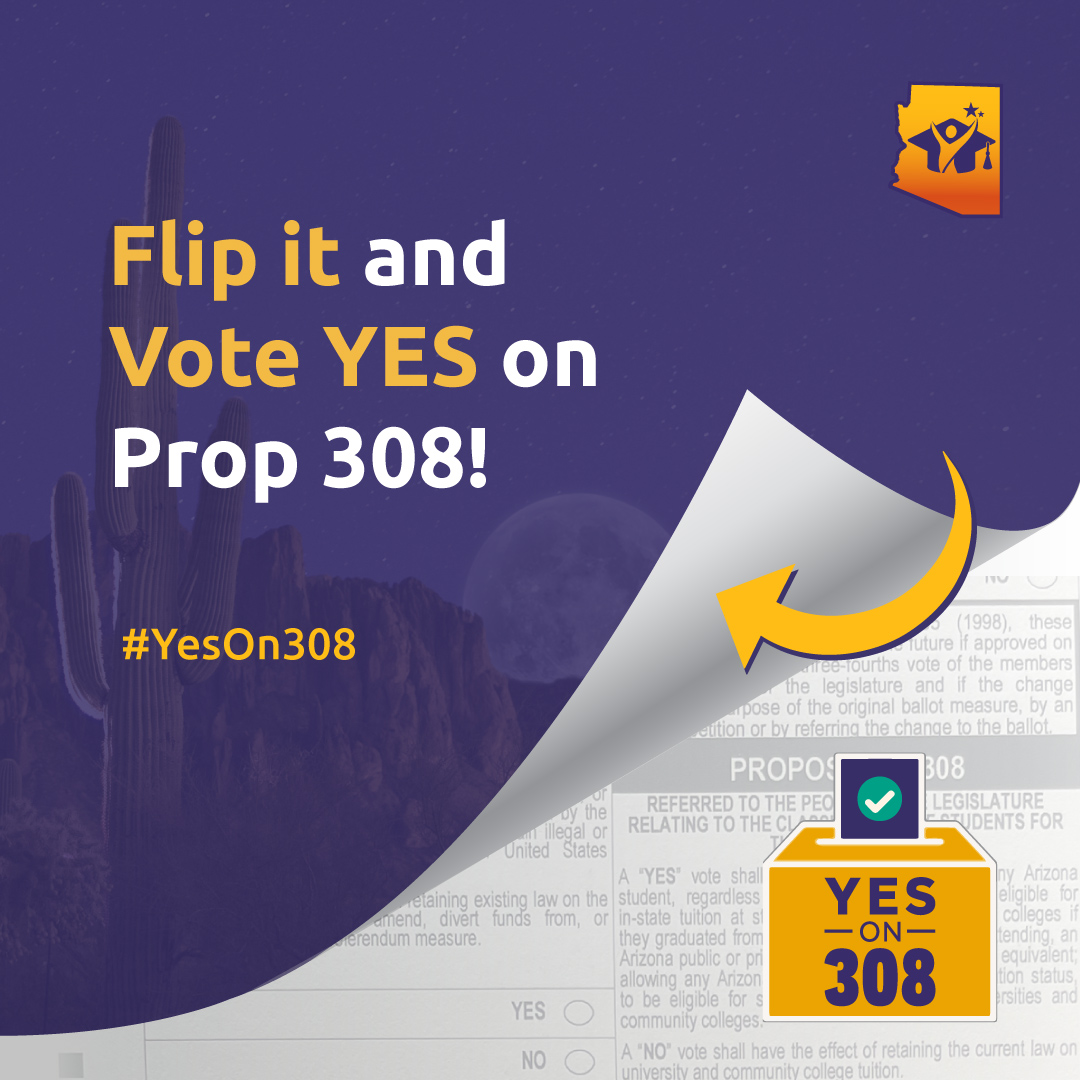 By Janet HernandezOctober 27, 2022No Comments

TUCSON, AZ – Today, U.S. Representative Raúl Grijalva and City of Tucson Mayor Regina Romero joined Yes On 308, LUCHA, Scholarship A-Z, Union Hospitality Group, Fuerte, Tucson Hispanic Chamber of Commerce and Dreamers from Tucson to urge voters to “Flip over your ballots!” and vote yes on Proposition 308. Once passed, the initiative, posted on the flip side of ballots, will allow Arizona high school graduates to pay the same in-state tuition rate at Arizona colleges and universities regardless of immigration status.

“It’s important that you flip that ballot and vote Yes on Prop. 308 to make an investment in the future of this state,” said Rep. Grijalva. He recounted how, early in his congressional year, he was visited by two imminent high school graduates, a valedictorian and a salutatorian, “whose dreams and ambitions were being put on hold because they were udocumented and did not qualify for support from any public entity. It was heartbreaking. There was nothing we could do about it.”

He then called on “the good people of Arizona to correct this. These young men and women are our neighbors; they’ve gone to school with our own kids. They work hard and want to move forward with their future. We need to invest in them or we’re going to lose them based on an unfair law.”

Tucson Mayor Regina Romero drove home the economic impact that Yes on 308 would have on Arizona: “Our DACA-eligible population has a total spending power of about $618 million a year. Arizona Dreamers create nearly $800 million in household income and pay about $180 million in taxes, $87 million of that being state and local. The more education a person has, the more spending power they have.”

Romero noted that she herself was the daughter of an immigrant farmworker and the first in her family to go to college. “I understand the value of education, and as mayor, I understand what it means to our city and economy, to employers who need the talent. Dreamers have already been going to our schools from K-12. We’ve already invested more than $300,000 each in them. Why not continue giving them the opportunity to invest in themselves and their families? It’s good for everyone.”

She concluded by reminding people that Prop. 308 appears on the flip side of the ballot: “Flip it over, to the end of all the ballot initiatives. This will mean so much to not just Tucson but the entire state.”

ABIC Action Deputy Campaign Director Juan Carlos Cerda noted that Yes on 308 has bipartisan support. “This cause has brought together Arizona Democrats, Republicans and independents from sectors of business, advocacy, faith, law enforcement and education,” he said. “All of us are committed to a tuition system that is fair for all Arizona children, so this ballot referendum is one of the most important ones on the ballot. In Arizona alone, there are more than 36,000 Dreamers, 95 percent of whom are employed. Prop 308 will fortify Arizona’s economy by encouraging all our talented students to build their careers here.”

He cited a recent study showing that Arizona would earn $660,000 more per college-educated Dreamer in spending power if the proposition passes. He also mentioned the proposition’s importance to the state workforce: “As the state continues to face labor shortages in key areas like healthcare and home care, talented workers with degrees are needed now more than ever.”

And he noted that “Arizona families will not pay a penny more in taxes if this passes.” Noting that he himself was a DACA recipient, he concluded, “I understand what Arizona Dreamers are going through to accomplish their dreams and build productive lives. I hope we can do right by them and encourage every registered voter to go vote early through November 4 and on Election Day on November 8. Please remember to flip your ballot and vote Yes on 308.”

Said Union Hospitality Group owner Grant Krueger: “As a business owner, I know the importance of having a talented, diverse and well-educated workforce. Passing Prop 308 would allow our Dreamers, some of the state’s hardest-working individuals, to access the same tuition rates as the students with whom they graduated from high school. This wouldn’t raise the state’s tax burden one cent. So I urge you to vote for this, because it would create a tremendous benefit to our state workforce and more than $28 million in income—a tremendous benefit for our state.”

Another business voice who spoke was Tucson Hispanic Chamber of Commerce President & CEO Rob Elias: “As an organization that supports thinkers, doers, builders and problem-solvers and continues to shape southern Arizona, we believe that Dreamers are our students and should be treated as such. They deserve the same education and employment opportunities as any other Arizona student. Allowing equal access to in-state tuition rates will allow them to reach their goals, become self-sufficient and give back to our state. The Chamber’s 1200 members rely on us to do the right thing and support common-sense policy that is also fair.”

Arizona Dreamers also spoke. Angela Cervantes, currently attending the private Grand Canyon University on a scholarship, said: “It wasn’t until high school that I realized how my future was impacted due to my immigrant status. I never understood why I couldn’t get my driver’s permit like my friends. I spent my senior year of high school coping with the fact that my family didn’t have enough money to send me to community college, let alone a four-year university, which had always been my dream.” She said that though she was grateful to receive a scholarship to GCU, “I hope that, after this election, undocumented students don’t have to worry about paying out-of-state tuition in a state where we’ve lived most of our lives. That’s why I’m here today asking you to vote Yes on 308, so we can fulfill our dreams and support our state’s economy.”

Said Dreamer Yaxiri Ortiz: “I am here today to remind everyone about the importance of Prop 308. I was born in Sonora [Mexico] and came to Tucson when I was one year old. My senior year of high school, I found out how my immigration status would impact my college pathway. After having overworked myself, trying to be the perfect student at the top of my class, who did multiple sports and was president of a lot of clubs, I was devastated to find out all that wasn’t enough. My goal of attending the University of Arizona was cut short because it was too expensive.”

She ended up going to Pima Community College, “where I had to pay the out-of-state rate of $8,000 for tuition alone, not including books or lab supplies. That wasn’t fair. If 308 is passed, it will allow me to pay more easily for my final two years of college. But I’m not the only one in this situation. Thousands like me have a similar story.”

Undocumented student Darlene Peralta talked about her high school years, watching Legally Blonde and wanting to be a lawyer: “My [citizen] best friend and I did everything together—prom, chem class, graduation. But she went right on to college while I worked for two years to save up $1500 for two college classes, compared to $700 for her. I still want to pursue a career in immigration law, so I’m here today asking you to flip your ballot and vote Yes on 308, to help so many other students like me.

Republicans for Prop 308: Letter of Support signed by 50+ Arizona Republicans