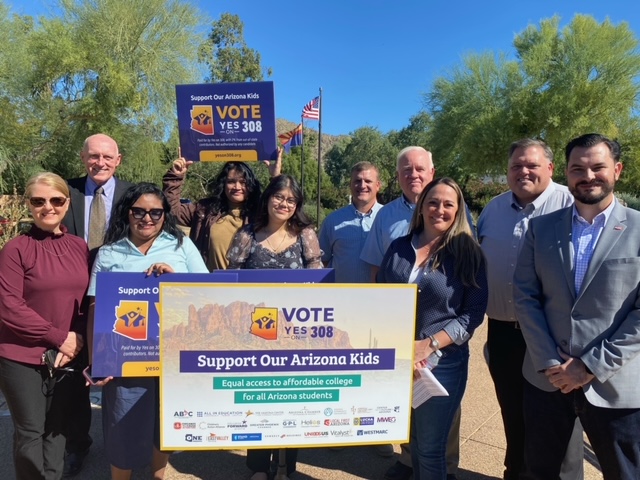 By Jacob PritchettOctober 28, 2022No Comments

The event came on the heels of this video from Arizona Republican former gubernatorial candidate Karrin Taylor Robson, in which she says: “As a business leader and Republican, I’ll be voting Yes on Prop. 308. It will improve Arizona’s economy by keeping skilled workers here in Arizona—kids we’ve already invested in for years—with zero tax increase. Vote Yes on Proposition 308.”

“Thank you for allowing me to come here today and support Prop. 308,” said Arizona State House of Representatives Speaker Rusty Bowers at the event. “I am grateful that I can stand here and say that the parable of the Good Samaritan is applicable all over this state.” He noted he was “surrounded by wonderful young people who were brought here by their families and need our help to excel in a fair way alongside others. Remember, 40 percent of our voting population has been here five years or fewer, and we embrace them. That’s exactly how I feel about Dreamers—they’ve come here, they excel, they want to help, they’re driven to succeed. And you and I as voters can help bring that dream to fruition for them. No, it doesn’t resolve the immigration crisis—that’s for Congress to do—but this is something we can do for young people in our state right now to help them, and us, move ahead.”

Said Representative Joel John, Republican in the AZ House of Representatives: “As someone who believes that hard work, determination and sacrifice lead to success, I think it’s just a smart policy to remove unfair obstacles standing in the way of these kids’ dreams. These are Arizona kids and their success is Arizona’s success. They’ve been educated in our schools, raised in our churches. They’ve played on our kids’ little league teams, and they’ve given back to our communities and benefited our economy in countless ways. These are Arizona kids, our kids, and their success is Arizona’s success.”

He continued: “But today they must pay almost three times more than their classmates to attend Arizona State University and our community colleges. Arizonans know that our economy grows best when the best and brightest are free to rise to the top. Our state is already invested in Dreamers’ high school education. Why wouldn’t we want them to build on this success? That is why I support Prop. 308. Building on this success means building a better Arizona.”

Said Dreamer Yarely Orozco Paniagua, a freshman on scholarship majoring in psychology at Grand Canyon University: “Arizona has been my home ever since I came here at ten months old from Michoacan, Mexico, with my two older sisters and my mother.  It’s the only place I truly consider a home.  I am a firm believer that your background does not define you or limit your potential. In May, I graduated in the top 1 percent of my high school, with a 4.9 GPA, and I was heavily involved in extracurriculars.”

She continued: “Every student has struggles and fears, but not all understand the disappointment and discouragement of not being able to afford higher education. Despite all my accomplishments, I was not eligible for in-state tuition, nor for most scholarships. I realized that my immigration status was my biggest disadvantage. I support Prop, 308 because only a year ago, I was a senior in high school struggling to find a university that would both accept me and offer me scholarships despite my immigration status. I believe we all deserve a genuinely fair opportunity to attend college. If we stand together, we can make a difference and help other undocumented students who are trying to fulfill their own version of the American Dream. We are not asking for an advantage over other students. We just want the same opportunity to attend college as any other student. Please vote YES on 308!”

Said Diego Diaz-Mendez, a Dreamer and junior at Arizona State University studying electrical systems engineering: “I’ve taken a couple breaks from school to work in order to get financially stable so that I could continue to go to school despite this roadblock. This shouldn’t be in the way of anyone coming after me. It’s pretty obvious that we should allow these children to better themselves, in order to become something and give back.”

Said Tyler Montague, Arizona Republican and Chairman of Yes on 308: “I’m delighted to welcome you today as our coalition continues our historic effort to promote fairness, equal access, and economic growth by passing this ballot measure. When Proposition 308 passes this November, it will that ensure any person who has lived in Arizona for two or more years and graduated from an Arizona high school will be allowed to pay the same tuition rates to attend Arizona state colleges and universities.”

He continued: “The Yes on 308 campaign is a truly bipartisan effort. This campaign has brought together Arizona Independents, Democrats, and Republicans from the sectors of business, advocacy, education, law enforcement, and faith. All of us are committed to a tuition system that is fair for all of Arizona’s students. Our coalition has launched a $3 million ad campaign all across the state featuring the stories of our Arizona Dreamers, business leaders, and supporters—to encourage Arizona voters to vote Yes on Prop 308. And together with our partners, we’re knocking on over two million doors. And connecting with voters that support this measure across the political spectrum.”

He concluded: “My hope is that our effort, along with that of Arizona’s voters, can do right by these students and our great state—by treating them equally.”

Lisa Hoberg, Republican Precinct Committeewoman, began by saying, “As the mom of an 18-year-old, I can’t help but think how proud of these Dreamer kids their parents must be.” She then said: “I’m proud to stand with Arizona Dreamers in support of this proposition 100 percent. I can’t overstate the importance of passing common-sense policies like this. Dreamers are Arizona kids–just like my son. And they have a lot to offer our great state. This should not be a partisan issue. All my friends and family—Republican, Democrat and Independent—agree that this is not only the right thing to do morally but economically. Dreamers who earn a college degree by paying in-state rates would boost the earnings of Dreamers overall by more than $28 million annually, which would add over $600 million to the spending power of Arizona’s DACA population.”

“Additionally,” she continued, “the state’s budget review committee noted that this proposal will not cost taxpayers anything extra. Our community of leaders understands that this will benefit not only our students, but small businesses, large employers and small businesses as a whole. This truly is one of the most important things on the ballot. I ask Arizona voters to vote YES on Prop. 308 this election!”

Said Heather Carter, Vice President, Greater Phoenix Leadership: “Thank you for standing with me in proud support of Prop. 308. We’re almost over the finish line, weeks away from righting a wrong done to these students year ago [when a vote passed barring them from in-state tuition rates]. A vote yes on 308 will empower our Arizona Dreamer students to continue their education. That’s what we all want, right? We want our students to be wildly successful. And for those who want to continue their education with college, this vote will empower them to make that decision affordably. I come here today as a former lawmaker. This vote is important to all Arizonans. This is for our future. Our business community needs an educated workforce to continue our thriving Arizona economy—and these students are an important part of that fabric.”

She then shared some key stats: “There are more than 36,000 DACA-eligible residents in Arizona, and 95 percent of them are employed. This population has a total spending power of $618 million—and Arizona Dreamers create nearly $800 million in household income. They pay over $180 million in taxes, $87 million of that being state and local. So while we’re here today celebrating the opportunity to vote for this, I really encourage all my Arizona voters to vote yes on 308 and give these absolutely incredible young people an increased opportunity to earn a college education.

“I’m the Republican mayor of one of the largest conservative cities in America. I think it’s smart policy to get rid of this artificial obstacle that currently exists for Dreamers who want to go to college. We don’t want to stop Arizona kids whom we’ve already educated in K-12 from going to college to become more productive and more self-sufficient. Prop. 308 will help accomplish that goal.” — John Giles, Mayor, Mesa, Arizona

“Prop. 308 is one of the most important choices on the ballot this November. As a Republican legislator and as an educator, a high school math teacher, I know the future of our state depends on our youth. Arizona will prosper or fail depending on the grit, determination and education of our youth.” — Michelle Udall, Republican State Representative, LD25

“Prop. 308 will help fortify our state’s future economic growth by encouraging all of our talented students to build their careers here, and that begins with fair in-state college tuition rates. Voters should vote YES on 308.” — John Graham, Chairman and CEO, Sunbelt Holdings

Economic growth: Arizona’s DACA-eligible population has a total spending power of  $617.9 million. Earning a college degree by paying in-state tuition would boost the earnings of Arizona’s Dreamers by more than $28 million annually.

Yes On 308 is a bipartisan campaign led by education, business, faith, and civic leaders seeking to provide all Arizona high school graduates, regardless of their immigration status, the opportunity to pay their own way through college at the in-state tuition rate. Ending the unfair treatment of Arizona’s undocumented high school graduates by allowing equal access to in-state tuition rates at the state colleges and universities will allow them to reach their educational goals, become self-sufficient, and give back to our community.